Cultural heritage within the GOP " Rila Monastery " is huge. At the foot of the park is the town of Rila . Here you can see one of the oldest churches in the area - "St. Archangel Michael " , which was declared a national monument and is currently undergoing restoration . In the mountain can be seen architectural complex Babinska neighborhood , which is an ensemble of preserved buildings - monuments of local importance. In Rila can be visited and the current church "St. Nicholas " , where the carved bishop's throne made ​​from Alexi . 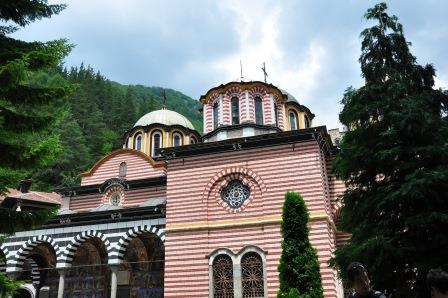 At the heart of the park is the most important monument of Bulgarian culture - Rila Monastery. It was founded in the 10th century BC ( 927-941 ) by the hermit Ivan of Skrino village , later called Rila . From 10th to 14th century, the monastery was located 3 km northeast of the present-day building. It was built around a natural cave , where he lived Ivan Rilski . In 1335 feudal Hrelyo Dragovola built monastery buildings naturally fortified terrace between the rivers Rila and Drushlyovitsa . Fortress tower ( 1340 ) is the oldest building in the monastery, preserved until today. The modern architectural appearance of the monastery is the product of the 19th century . For four years to build the residential wings , and after 13 years is finished and the last part that closes the church yard and surrounds it .

In the monastery are created , collected and safeguarded religious reverent manuscripts and incunabula , historical documents , endowment royal charters , icons and church plates , zlatoshiti garments and gifts brought from the believers . His importance to the religious center is recognized by the entire Orthodox world , as evidenced by numerous documents stored in the monastery library and museum collections . Rila Monastery open to visit are: the main church " Virgin Birth " , Historical Museum , cookhouse and museum business . In 1983 the monastery was declared by UNESCO as a world cultural monument .

Near the monastery there are two convents - Orlitsa and apiary. Nunnery " Orlitsa " is located 3 km from the town of Rila along the asphalt road to Rila Monastery . This is one of the oldest convents of the Rila Monastery , which is mentioned in the Charter of King Shishman ( 1378 ) . This temple was built in the name of the apostles Peter and Paul from 1469 with frescoes from 1479 church was built in conjunction returning the relics of St. John of Rila from Tarnovo in 1469, the palace is one of the oldest Bulgaria vines planted in the 20s of the 19th century convent " Pchelino " - this is the business for Rila Monastery where he was on business and forestry activities. About 500 m north of it in the late 13th century the chapel " Assumption " written in 1835 by Dimitar Molerov . The church kept a few of the earliest Renaissance icons made ​​for the monastery of Mount Athos monk Zacharias . Here is one of the most valuable icons with the image of St. Ivan Rilski .